That was my smart alec answer when someone asked what I'd be doing on my first day of freedom from full time permanent work and, to some extent, it's true though as with all things it's never quite that simple is it?  I may be free of the constraints of a permanent work contract but we are sadly not free of the constraints of a mortgage, or petrol, or food...  Turning into a couch potato was never on the cards because a) daytime TV is an abomination and b) well, there's no need for a b) is there?  I think a) says it all.  Jeremy Kyle holds zero appeal and I've never seen an episode of Loose Women; I really don't feel as if I'm missing anything.

I've been mulling over the mindset of those of us who launch into the world of self employment and I reckon we're 1 part confident, 1 part ambitious, 1 part bonkers and 1 part scared, but we use that fear to drive us.  For many people the fear stops them doing stuff, for us it drives us to do something different because we're scared of different things.  Speaking for myself I'm scared of routine and predictability, I'm scared of not having a go and I'm scared of getting to my old age and wondering "what if".  I also think our definition of "comfort zones" is quite different to other peoples. 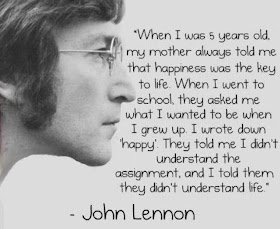 At my leaving do on Friday evening I was asked about how much work I had lined up.  I replied (truthfully) that I was pleased because I had more than enough work to pay the mortgage until next June, which I thought was a good thing; in my experience freelancers trainers don't usually get to book much further ahead than that.  The 2 people I was talking to looked horrified "But what about July?" they asked.  "Well, I'll be working on that next year" I answered, though I could tell it didn't appear to do much to convince them I wasn't 4 parts bonkers.  In some ways I can see their point, you see we don't have the luxury of a second salary propping us up; true, we have a modest amount of savings but as soon as we start relying on those we're in big trouble so our goal is to keep the savings safely in the bank for now and pay the bills through hard graft, and it's looking good so far.

The other thing in our favour is our desire for a modest, but happy, life.  On Friday the conversation turned to "what would you do with £1m?" to which most people replied that it wasn't enough to completely change their life because "after you've bought a new house and a couple of cars there wouldn't be an awful lot left".  For us it would be way more than enough - pay off the mortgage, buy a car that goes and stash the rest.  Also, it's not that I don't want £1m, but I'm pretty sure that lots of money could stifle creativity, at the moment the need to to keep a roof over our heads is a pretty powerful motivator - seems Maslow may have had a point afterall.

So, after all that, what did Day 1 hold in store for me?  The thinking behind my flippant answer above was that if the weather was nice we'd be able to head for the hills and if it was tipping it down we could crack on with developing the website and writing stuff.  Turns out it was tipping it down so lists were made and meetings were held, and pretty good meetings they were too as it happens; I caught up with an old friend, swapped writing and tourism tips and and made plans with those lovely folks at The Herdy Company to write some content for their website.  Suffice to say that Day 1 was a good day, even if it was raining; so here's to paying the mortgage, and eating, in July 2013.  Cheers!
Cumbrian Rambler at 12:31
Share