More than just a war memorial

June 8th 1924 is an important date in any mountain enthusiasts diary, it is the day that George Mallory and Andrew Irvine were last seen alive as they headed towards the summit of Everest.  At around 12:50pm they were sighted by Noel Odell as two tiny specks moving upwards before the clouds blew across obscuring them from view and transporting them into the realms of folklore.  No definitive evidence has ever been found to prove whether they made it to the summit or not and most members of the outdoors community have an opinion on the matter one way or another.

June 8th 1924 is also important for another reason rather closer to home.  As Mallory and Irvine fought for survival on Everest 80 members of the Fell and Rock Climbing Club (FRCC) unveiled a plaque on the summit of Great Gable commemorating their members who had died during World War I.  By all accounts it was a typical British June day, the rain was pouring and the wind was howling, but the weather abated long enough for a short service to take place allowing those assembled to unveil the plaque and pay their respects.

One of the most prominent members of the FRCC present on the Great Gable was Geoffrey Winthrop Young, a writer, poet and mountain climber who had been a close friend and mentor to George Mallory.  This was his first climb since losing his leg during the war and obviously at that point he had no idea about the tragic events unfolding on the other side of the world.

But the FRCC did far more than simply unveil a plaque.  Following the Great War they purchased 3000 acres of land in the area and handed the title deeds over to the National Trust to commemorate the lives of those that had died.  The exact map of the area purchased and more details of the ceremony that day can be found here.

Every year on Remembrance Sunday hundreds of people gather at the memorial on the summit of Great Gable to pay their respects and remember those who have died in conflicts around the world.  I'm afraid I'm not a fan of crowds so we decided to pay our own quiet a few days early on a glorious November day.

We took the regular route from Seathwaite up to Styhead tarn over Greenhow Knotts, from there we followed the path alongside Kern Knotts to the summit before dropping back down via Windy Gap and Aaron Slack and then the adventurous/ boggy/ what were we thinking Taylorgill Force route back to the farm. It was a perfect, crisp autumn morning and the views from the summit were a who's who of the Lake District fells.

One of the things I love most about the fells is that, for a while at least, I feel as if I am far removed from the craziness of modern life.  There's no reception on my mobile phone, I can't see any office blocks and the endless views take my mind away from my day to day worries.  When I'm on top of a fell I find it blissfully hard to remember what it's like being crammed into a rush hour tube train, never mind trying to imagine what it must have been like to be terrified and freezing in a rat infested trench.

The whole point of memorials is to make us remember because as soon as we forget then there's a danger we'll start making the same mistakes all over again, so I tried to find some statistics that should stick in the mind, I think these should do it:

Because of its history this memorial on top of a 450 million year old mountain in the middle of the Lake District will, for me, always be so much more than just a war memorial.  Wars have claimed the lives of countless millions over the centuries and hundreds, probably thousands, of others have died like Mallory & Irvine, pushing the bounds of human endurance and exploration.

Yes it's a place for sober reflection to remember those who have gone before, but it's also a place to look around at the breathtaking scenery and be thankful that you're alive and free to enjoy it. Life is spectacular, fragile and very, very short so try to make the most of every single moment and always try to have fun, even if you're stuck on a fell in a howling storm; just fix your mind on the hot bath at the end and try to smile as the rain drips off the end of your nose. (And if you ever happen to bump into me on a cold wet fell cursing as I stumble along in the pouring rain, please feel free to remind me of this blog.)
Update Nov 2021: I recently discovered this wonderful piece, written by my Grandad when he was in his late 20s. It describes Armistice Day 1935 in the factory where he worked. 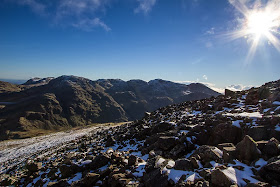